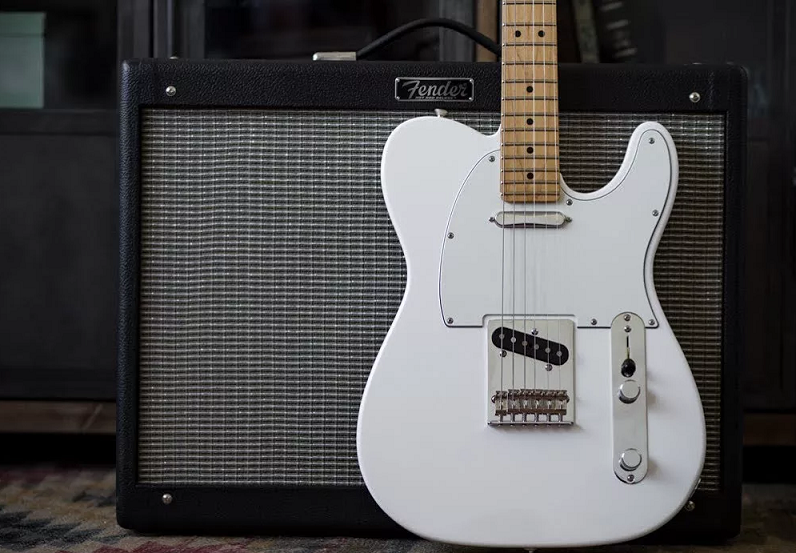 First in BillyBadAxe’s Classic Electric Guitars 101 series: the Fender Telecaster. The tele started it all so here it is. Second and third are the Gibson Les Paul and the Fender Stratocaster.

Named to reflect the growing influence of television in 1951, the Fender Telecaster was the first truly modern electric guitar. Designed and built by self-taught electronic engineer Leo Fender, the Telecaster as sold today is virtually unchanged from the model that was first put on the market as the Fender “Esquire” in 1950 and then changed to the “Broadcaster” in 1951, before a final name change later that same year settled the issue. Not many products remain in the marketplace without major alterations for six decades, but the genius of the Telecaster is that it is an instrument that takes intricate principles like intonation, tuning, and electronics, and converts them into a finished product of blinding simplicity. Three controls and six strings mounted on a solid block of wood bolted to a graceful neck, and there it is.

The story goes that forty-one year old Clarence Leonidas Fender wanted to test out some guitar pickups that he had designed and so worked up a rough solid body guitar to test them on. He was then surprised when musician friends began asking to borrow the guitar for gigs. The solid body of Fender’s guitar meant that there was no feedback, an issue which had plagued guitarists of the day using converted hollow-body acoustic guitars. The idea to place all six tuners on one side of the headstock meant that the guitar held its tuning longer.

Realizing that he had hit on something, Fender began polishing up his prototype and worked to make a guitar that would be resistant to feedback and easy to repair. His guitar, completed near the end of 1949, was made up of a solid ash (originally pinewood) body with a single cutaway to allow access to notes high on the neck, and one single coil pickup near the bridge. It had two knobs: one volume and one tone. The electrics were easily accessed through removable covers. A maple neck was bolted on to the body rather than glued as was the norm at the time and though Fender had a neck pick-up designed by early 1950; the “Fender Esquire” was released that spring with only the single pick-up. Interestingly, the original model lacked a truss rod in the neck, which was later rectified after problems with warping. When the second pick-up was added the name of the guitar was changed to the “Fender Broadcaster” until a telegram from the Gretsch Musical Instrument Company arrived pointing out that they had an existing line of drums which were titled “Broadkaster”. Fender promptly stopped labeling his guitars for a period while he came up a new name and the “Fender Telecaster” appeared in late 1951.

The Telecaster’s simple design meant that it could be produced faster and in larger quantities than had been possible with guitars before and its twangy sound gave it instant popularity with guitar players, primarily in the country and western genre that was Fender’s favorite. Luther Perkins used a Telecaster on the first Johnny Cash recordings like “Folsom Prison Blues” and “I Walk the Line” in the early 1950s and other legendary country players to make use of the Tele were Merle Haggard and his guitarist Roy Nichols, as well as Buck Owens and James Burton.

The Tele also proved popular with blues musicians like Muddy Waters, who used it for the cutting opening notes to “Mannish Boy”, and the “Iceman” Albert Collins’ frosty blues lines were picked out on a minor tuned Tele that was more often than not sporting a capo. Its exposure by such influential artists meant that by the next decade many guitarists in the rock genre began using Telecasters. Among its devotees were Ray and Dave Davies of the Kinks, whose distorted intros to songs like “You Really Got Me” and “All Day and All of the Night” were revolutionary in their ferociousness. Eric Clapton used a Tele during his time with the Yardbirds, as did Jeff Beck and Jimmy Page. It’s a little known fact that most of the first Led Zeppelin album was recorded with Page using a Telecaster, who would also utilize the instrument for arguably the band’s highpoint in “Stairway to Heaven.” When Bob Dylan controversially began using electric guitars in the mid-1960’s his weapon of choice was a blonde Telecaster.

At the same time, Steve Cropper, the session guitarist with the Stax Record Label and Booker T and the Mgs, used his Telecaster on the songs he recorded with soul singers like Otis Redding and Wilson Pickett, as well as the instrumental classic “Green Onions.”

While the Telecaster was primarily designed with country players in mind, its versatility meant that it could be adapted into many different styles apart from rock and soul. Syd Barret, the first guitarist with English psychedelic band Pink Floyd, was a devoted Tele player, and although his replacement Dave Gilmour is better known for his work with the Stratocastor, he has also made use of the Tele on many occasions.

Probably the best known Telecaster aficionado in the rock arena is Keith Richards of the Rolling Stones. He discovered the guitar in the late 1960s around the time that the Rolling Stones were getting their second wind after a less than successful foray into psychedelia with the album “Their Satanic Majesties Request” and by making use of alternate tunings usually associated with slide guitar, he created a whole new method of rhythm guitar on songs like “Brown Sugar” and “Honky Tonk Women.”

The Tele’s popularity continued into its third decade when it was adopted by punk players like Joe Strummer of the Clash and Chrissie Hynde of the Pretenders, as well as more middle of the road heavy rock bands like Status Quo. In the eighties it was the turn of Andy Summers of the Police and Bruce Springsteen to display its merits, and by the time of the Telecaster’s fiftieth birthday it had added such diverse artists as Graham Coxon of Blur, Sharleen Spiteri of Texas, and Jim Root of Slipknot to its bulging roster of players.

If you’re looking to buy, the best way to go is still with the Fender Company itself. Although the basic design of the Telecaster hasn’t changed since it was first produced, there have been a lot of small modifications over the years, particularly with pick-ups. Some models, like the Telecaster Deluxe and Telecaster Custom, have humbucker rather than single coil pick-ups for a heavier sound, while the Telecaster Thinline is semi-hollow. A proper Fender Tele will start off at around five hundred and go all the way up to tens of thousands of dollars. If you’re not looking to spend that much, a good alternative is to go with Fender’s budget brand Squier, which produces quality instruments from less than two hundred dollars to the five hundred area that Fender starts at.

Where Are Current Teles Made?

Mid-range: The moderately-priced Standard, Classic and Deluxe Telecaster models are manufactured in Mexico, Japan and Korea. (via wikipedia)

Entry-level: The Squier Telecasters are made in China, Indonesia and elsewhere.

Notes: our good friend Aaron owns a MIM Tele and loves it. He upgraded the pups and hasn’t looked back.

Pine (similar to ash) body with vintage Blonde finish. Two custom vintage-style alnico III magnets single-coil pickups give that Telecaster tone. One piece maple neck is amber-tinted to give off a vintage aesthetic. The maple fingerboard is a slightly flatter 9.5″ radius and medium-jumbo frets for easier string bending.

Fender Squier Standard Telecaster (made in Indonesia, or elsewhere)….$229-$250

Note: Dave owns this model and is quite satisfied. Nice neck. Though the pups are going to be swapped out soon…

No two guitars, even machine made, are exactly the same. When buying, make sure to hold the guitar in your hands and try it out, even if you can’t play anything just yet. Let your hands guide you. Check out our rules to buying guitars online.

The tele sound is often described as “twangy,” but that doesn’t tell the whole story. Teles are nothing if not versatile. Teles can be used in pretty much all genres: country, rock, blues and jazz. The bridge pickup delivers a clear, bright sound for single note picking and solos. The neck pickup is warm and rich, great for blues, jazz and chording. Below are some examples of classic tele performances so you can hear the diverse, yet distinct, Tele sounds. Soak up the tele vibe!

Johnny Cash: I walk the line

Classic video from the 50s featuring a young Johnny Cash with Luther Perkins playing a Telecaster. Nice warm, round, tele sound from the neck pickup.

Fantastic version of the classic Muddy Waters tune. 28 years later George Thorogood would bring this song back and make it famous, but the original is awesome.

Here’s Jimmy on his tele.

Keith and his tele.

The Clash: Train In Vain (Live)