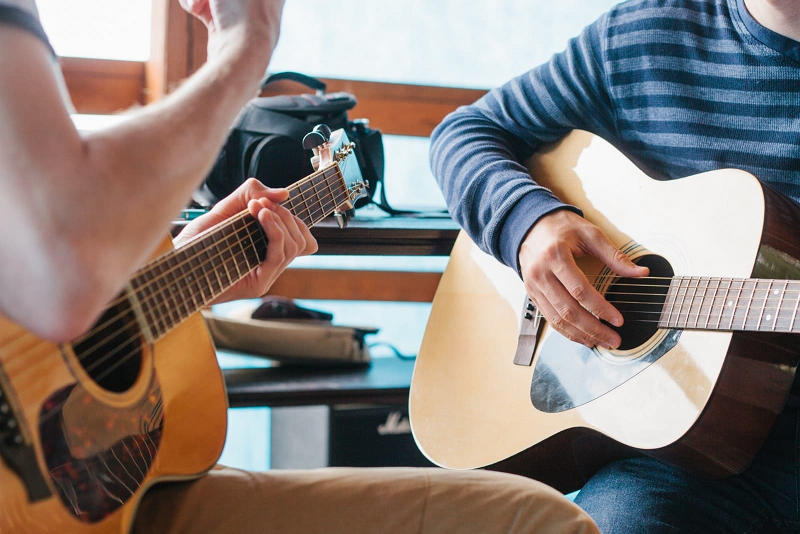 One of my friends in high school played drums. He had a full drum kit that took up a large chunk of his room: a big bass drum, a snare and two toms on either side, a high hat, and that huge gold cymbal that said “Zildjian” on it. For a kid in high school it was a thing to be marveled at. I remember one day he was playing the drums to Rush. His parent’s weren’t home and the music and the drums were deafening and wonderful. You could feel the music through the floor into your bones. It was our own little live house. The girls from down the street were there and they were watching him play. And I was watching the girls watch him play. They had that look in their eyes. It wasn’t quite awestruck but something in that general direction. It was a moment of crashing realization.

I ran home right after that and there was Dad, in the kitchen, pouring some iced tea into a plastic cup. “DAD, I’VE GOT TO PLAY GUITAR!” It was perfectly logical. There couldn’t be TWO drummers living right down the street from each other. And Dad has a guitar. And guitars are cool. So there it was, the path to fame and girls’ adulation. Guitars.

For awhile when I was young Dad had a Gibson Melody Maker. It was a cherry red double cut-away version. When I was seven or eight he’d take me to his friend’s house and he’d play rhythm while a few other guys would jam. I remember standing in his friend’s room while they were playing and looking up and being surprised to see mirrors on the ceiling. I had landed in 70′s guitar heaven but didn’t even know it. Dad sold the Melody Maker one year so I could go to the Kenny Stabler football camp for a week. Kenny never showed up, but a lot of other players did. And I never became a football player. And Dad’s Melody Maker was gone.

So I played his Epiphone acoustic. He told me where to put my fingers to make a C chord and it sounded terrible. This guitar stuff is going to be tough. But my mind was set. Pretty soon I was taking lessons about once a week with a guy named Tommy, who taught guitar in a tiny industrial complex across the street from my high school. I’d carry the acoustic to school, then walk over to Tommy’s to take a lesson. Tommy’s studio was literally in a warehouse storage space with concrete floors and corrugated tin walls. But that didn’t matter. He was a good teacher and a fantastic guitarist. He had a black Les Paul and I’d watch him play before my lesson started. He’d stand there playing the Les Paul through a Mesa Boogie amp with a pencil in his mouth. The room would be full of these wonderful Jazz sounds that just blew me away and then nothing–all you could hear was the pencil scratching down notes. Then more round, full Jazz sounds, another phrase, and more scratching.

I’d take the Ephiphone if I went to my grandmother’s house and practice playing chords there. Slowly I got to the point where I could play snippets of songs. So I started saving up for a guitar of my own. When I was ready to buy something, Dad took me to a guitar store in town. I had a about $300 to spend. It boiled down to an Aria Pro II or a Squier Strat. This was around 1985, and the Squiers at that time were made in Japan. (The MIJ Squier guitars are actually still holding their value pretty well.) I didn’t know Fender from Aria so name brand recognition meant nothing to me. But holding the Strat just felt so good. The Strat style body was fantastic and it looked great. The Aria had gold tuners and bridge that seemed a little too flashy. And I distinctly remember the Eurythmics video from ’85, “Would I Lie to You?”, where Dave Stewart was playing an all black Strat and it looked so cool. So I got the Squier.

I also got a big Peavey Bandit amp which was too big for my room. Too big for the neighbors. It had a foot switch you could pull out and switch between the clean and distortion channels. The first thing I noticed with the Squier was I gravitated to the warmer, fuller neck pickup. The bridge pup just didn’t have much oomph. When I hit the distortion, I really wanted an AC/DC-style crunchy, humbucker sound, which the Strat was never going to deliver. I was oblivious to this simple fact and that kind of marred my appreciation for the guitar which I’d kill to still have.

Around this time I started to get frustrated. I wanted to use the guitar as a form of self-expression. You know, make music. You know how these notes go with these chords. And why exactly is that? I remember thinking the guitar to me was a useless piece of wood. My friends could play by ear any song they heard on the radio. I decided I was tone deaf. But now I know, I just hadn’t been playing and listening long enough. I’d only been playing for a year or so at that point. My guitar teacher, Tommy, had me heading in the right direction: He taught me chords, barre chords, jazz progressions, etc. Then got me going on pentatonic scales and the extended pentatonic scale. But I was young and impatient.

Just before going to college, my friend Billy traded me his red MIJ Contemporary Strat for my black Squier. I think I gave him $100 plus my guitar. The Contemporary Strat came in a handsome tweed case and had locking tuners and a Floyd-like bridge with fine tuners and I couldn’t keep that dang thing in tune to save my life. All I did was futz with the fine tuning knobs on the bridge. I’d forget that I had the locking nut and wonder why the sound wasn’t changing when I turned the tuning pegs. Maybe that’s why Billy traded me? The red strat was a good guitar and I wasn’t ready for it.

One day in college I sold my amp because I needed the money. So later I went down to the guitar store and traded the Strat straight up for a Takamine acoustic with no case. The guy in the guitar shop was giddy: “Ohh, I saw that tweed case coming when you were outside!” I think he probably screwed me. We live and learn. After college I sold the Takamine to a kid in the mall parking lot for $150. I needed the money. He brought some guy with him who was supposed to know a lot about guitars and he was pointing out small flaws everywhere, real or imagined, I’m not sure. Which left me guitarless. At which point I guess I quit. No fame. No adulation.

Fast forward about 25 years. Time really flies when you quit playing guitar and get married and have two children.

A guy I used to work with is a street performer named Tak. He loves playing the violin, but in his act he had a cheap Les Paul copy painted yellow and black. The strings were about a 1/2 inch off the neck because he was using it as a slide guitar in his show. One day he brought it to work and I grabbed it and started playing around with it. And I got hooked. I wanted to play guitar again. Tak let me borrow the yellow Les Paul. I put some new strings on it and lowered the action a little and started playing old chords and snippets of songs that I remembered. And it really took me back in time. I was the same kid sitting in his bedroom with a black Squier Strat again. In a short time I could play exactly what I could play when I quit. My brain had forgotten but my fingers hadn’t. Jazz chords that Tommy taught me came back. So did the first part of the Stairway solo that I was trying to learn. And I made the same mistake when playing Over the Hills and Far Away.

For awhile I kept thinking that I’d been playing for so long, I should be better. I should play Over the Hills and Far Away cleanly, dangit! But then I realized that really I’d only been playing for a few years.

This time around though, I’m older and patient. I have specific goals: play the Stairway solo. Play some AC/DC. The Comfortably Numb solo would be nice. I just wanna sound impressive! I don’t need to be a pro, or “play out”, or play a million notes a second. I just want to play music that I like and play it well.

I’m going to write down just about everything I learn along the way. I hope you learn something, too.

Why do you play guitar?

Guitars 11
No matter how many guitars we own, we always need another one. Just ask