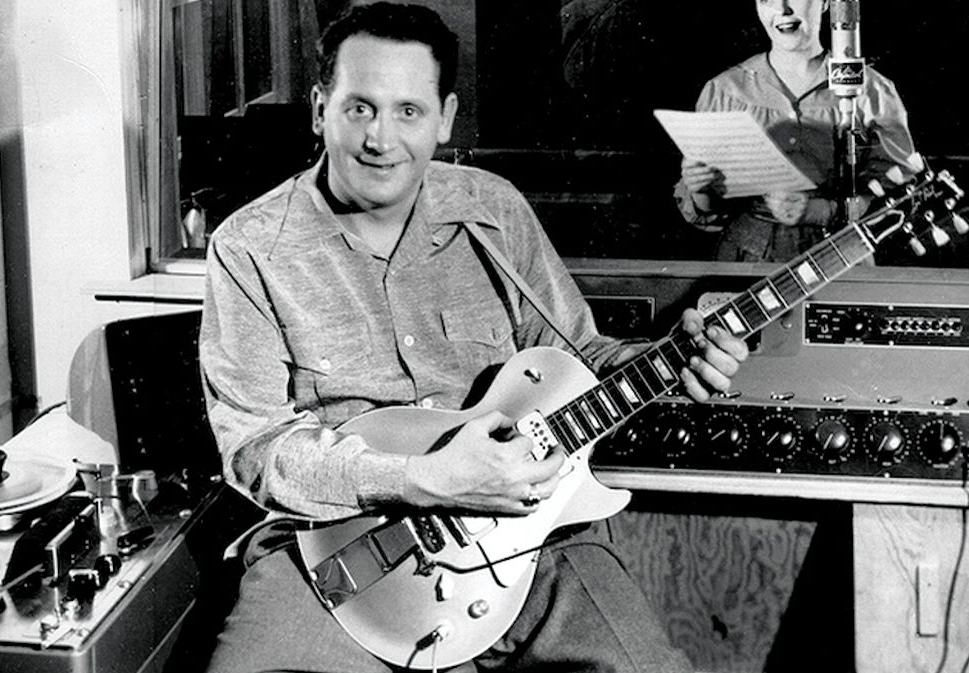 It’s no exaggeration to say that without Les Paul, we wouldn’t have anything like the guitar music we have today. His contributions to guitar technique, recording, and innovation in the 1940s and 1950s are unsurpassed. At the same time, Paul was a versatile entertainer, who could play virtuoso guitar in many styles; jazz, country, and pop being the three he is best known for. His incredibly long career spanned from the 1920s, when as a young teenager he would play at roadhouses and country dances, all the way into the new century and up to his death in 2009 at the age of 94. Slash, Jeff Beck, James Burton, Danny Gatton, Richie Sambora, Steve Lukather, Brian Setzer, as well as his godson Steve Miller, are among the guitarists who have acknowledged Les Paul as an influence, and without his signature guitar the records of bands like Led Zeppelin, Thin Lizzy, the Allman Brothers, the Clash, and Oasis would have sounded very different.

Paul was born in Waukesha, Wisconsin in 1915, as Lester William Polsfuss, in a family of German descent. He began working with electronics at a very early age, as well as playing guitar, and by the time he was thirteen he was playing country music in local bands. Among his early innovations were a harmonica holder which allowed him to accompany himself on the guitar, as well as a rudimentary guitar amplifier so that he could be heard by the large crowds that attended his shows. After moving from Wisconsin to Chicago in the early thirties he began making radio appearances, which led to him meeting Bing Crosby, with whom he would have an enduring musical partnership, Paul accompanying Crosby’s dulcet tones on melodious guitar. In addition to backing Crosby, Paul was also noted for backing the Andrews Sisters as well as making records with his own group “The Les Paul Trio.”

His career was not without its setbacks, however. He was seriously electrocuted in 1940, a common hazard in the early days of electric guitar, and was in recovery for the best part of two years. Upon recovery, the United States entered the Second World War. Paul was drafted into the armed forces and spent the war playing guitar for the entertainment of the troops, again backing Crosby, among others. A very serious car accident on the famous Route 66 highway in the late forties nearly ended his guitar playing career altogether when his right arm was shattered, but the doctors were able to reset his elbow in place so that he could still pick and strum the strings, though he never regained full mobility.

Les Paul met Mary Ford during the last days of the war in 1945, and it was with her as vocalist that he would have some of his most successful hits and highest record sales, releasing songs like “Bye Bye Blues” and “The World is Waiting for the Sunrise.” The couple appeared on records, radio, T.V. as well as touring together, before divorcing amicably in 1963 when Ford became disenchanted with the unsettled lifestyle of the traveling musician. Les Paul himself would go into semi-retirement in the late sixties, although he did occasionally make records, such as his 1976 collaboration with Chet Atkins, entitled “Chester and Lester.” He would also win Grammies at the age of 90 in 2006 for his album “Les Paul & Friends: American Made World Played.” Les Paul continued playing live every week at the Iridium Jazz Club in Manhattan until his death in 2009.

Les Paul’s main contribution to recording technology came with his innovations in layering tracks over each other. A tinkerer with electronics from an early age, oddly it wasn’t until Bing Crosby suggested that he build his own studio that Paul considered the idea of making his own recordings, after he complained of being unhappy with how his records had sounded up until that point. At first he used discs to record a guitar part and then would record another playing along with the original, creating a layered effect and what was effectively multi-tracking. This was a costly and destructive process, however, because the original discs could not be used for rerecording and so would be discarded in their hundreds as the sessions went on. Following the end of the war, a solution was found. An engineer by the name of Jack Mullin had returned to the United States with a Magnetophon tape recorder and some Farbin tape which was hitherto almost unknown in the States. Les Paul’s friend Crosby was again to help him out as he hired Mullin and set him up with the Ampex firm to produce tape recorders based on the German model Mullin had returned with. Crosby gifted the second such recorder to Paul, who promptly began tinkering with it.

By adding another playback head to the existing two, Paul could layer tracks as he had been doing with the discs, only now the process was much less time consuming and costly with tape. At the same he was able to continue the experiments he had already starting with echo and varying speeds. Tape made playing along with something at half speed and then bringing it back up to normal possible, allowing Paul to play things at “double speed.” He also began to experiment on close miking techniques with Mary Ford, placing the microphone closer to her, thus allowing her to sing in a more intimate and relaxed tone than had been heard before when the mike had been placed a foot or more away from singers by recording engineers. In 1957, Les Paul’s innovation was brought to its logical conclusion and the first eight track recorder was created by Ampex.

Despite his massive contributions to recording technology and music in general, Les Paul will always be known primarily for the guitar which bears his name. Like many guitarists in the 1930s and 1940s, Paul was frustrated with the limitations of the available electric guitars, which were effectively acoustic guitars with pick-ups attached. At the loud volumes necessary for playing to large crowds, the kind which Les Paul and his band attracted, feedback was a constant headache, as was a lack of sustain in the notes because the sound of the string disappeared in the cavity of the hollow guitar. Paul set out to correct these problems and like many great inventors before and since, he went through many prototypes before finding a model that fulfilled his ambitions. This was the model that he would affectionately refer to as “the Log.” It was an apt description as the “guitar” was actually a length of 4×4 timber, a fencepost according to legend, that Paul attached a guitar neck and two pick-ups to. Although it didn’t look like much, “the Log” was just what Paul was after. The solid timber meant that the sustain he craved was now achievable and the problem of feedback was negated. For appearances sake, Paul sawed out an old Gibson guitar, and fitted it around “the Log.”

His first attempts to market the guitar were not fruitful as the Gibson Company believed that his invention looked like “a sweeping brush with strings.” This initial rejection meant that Leo Fender beat Paul to releasing the first solid body guitar when he released the “Esquire” in 1951, a guitar which would morph into the “Telecaster” at the end of the next year. Gibson soon realized their mistake and the “Gibson Les Paul” was released in 1952. The guitar was, like the Telecaster, an instant classic and had huge sales. Its semi-solid body gave it a depth of sound that the thinner sounding Telecaster lacked, and its ability to sustain was also superior.

Gibson made a modification in the early sixties to counter falling sales, and released a “new” Les Paul guitar in 1961. Les Paul himself, not consulted on the changes, immediately asked for his name to be taken off the new guitar, which the company did, and the “Gibson S.G.” or “Solid Guitar,” another huge seller for the company, was born. Paul stuck with own design for the rest of his career, albeit with personal modifications unavailable to the public like self wound pick-ups and the “Les Paulveriser.” This machine allowed him to record himself playing while onstage and then play again over the top of his by now looped recording. This is similar to the multi-FX recording pedals available to all guitarists today, but it should be noted that Les Paul was doing this on stage fifty years before this sort of technology became commonly used by other players.

Les Paul’s guitar style was also noteworthy for its inventiveness. At a time when many lead guitarists relied on double stopped chord based solos, Paul’s guitar style, heavily influenced by jazz legend Django Rheinhardt, was more scale based and fluent. He incorporated techniques like trilling, rapid hammer ons and pull offs, along with lightning fast picking to create sounds that would later be copied by better known “speed” guitarist like Eddie Van Halen and Kirk Hammett.

Rather than using the guitar as a rhythm instrument as it had been in the decades prior to his era, Paul used it as a harmony device along with whichever singer he was backing at the time. His guitar lines effectively then became another voice, supporting the main melody of the song, adding counterpoint, or call and response.

For all of his innovations, but particularly the instantly recognizable guitar, Les Paul will be remembered among the greatest guitarists and recording artists of the last hundred years. After spending a literal lifetime in music, it is fitting that he is commemorated with his own section in the Rock and Roll Hall of Fame.