The flanger guitar effect that was first created by playing the same piece of music on two tape recorders at the same time and deliberately slowing one of them down. When two analogue tapes are played together like this, they are slightly out of time due to imperfections in the machines and tapes themselves anyway and this can give a slightly wobbly sound. By slowing one of the tapes down further, the wobbling is increased and the resulting effect is a whooshing or wavy sound. Most people describe flanging as like the sound of a jet taking off.

There are a few differing stories as to how the effect got its name. The most obvious is that when the artist or recording engineer wanted to use the technique they would physically slow the tape by pressing the center or “flange” and so the process came to be called flanging. Another popular story is that John Lennon of the Beatles once asked their producer George Martin to explain how the process worked and Martin replied with a nonsense answer that included the word “flange.” Lennon was a big fan of the technique, which he first used on the track “Tomorrow Never Knows” in 1966, and whenever he wanted it included he would ask for “flanging” from then on. With the Beatles huge influence over the world of popular music at the time, the name stuck.

Although the Beatles are often credited as being the innovators when it comes to flanging, the effect was first put on record over two decades before by guitar legend and recording pioneer Les Paul. Today primarily remembered for the guitar which bears his name, Les Paul was also responsible for inventing many of the techniques that nowadays we take for granted in songs on the radio and in our own home digital recording. His song “Mamie’s Boogie,” recorded in 1946, used a flanging sound that he created with two tape machines in his garage. It wasn’t until the end of the next decade that it was used again in a noteworthy way, this time on Toni Fisher’s 1959 song “The Big Hurt.”

It was in the 1960s that flanging really came into vogue with groups like the Small Faces (Itchychoo Park) and Jimi Hendrix (Axis: Bold as Love), as well as the Beatles making use of the effect. This continued into the seventies with David Bowie, the Rolling Stones, and Van Halen all making music that utilized the spacey whoosh. Flanging could be used sparingly in order to give a guitar, vocal, or drum sound an unworldly quality, or if pushed to extremes, it could create that jet noise that gave a track a wild and untamed sound, a great example being Eric Bell’s guitar break on Thin Lizzy’s 1973 track “The Rocker” and Lenny Kravitz’s “Are You Gonna Go My Way?” from 1993. 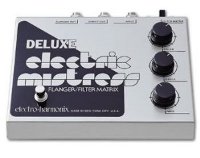 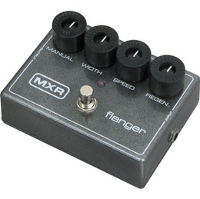 It was in the seventies that the first dedicated flanger stomp boxes appeared with the MXR and Electro Harmonix “Electric Mistress” being two early models. Originals are still available, but both companies have reissued them and they are available for between a hundred and a hundred and fifty dollars. Lots of different models have come onto the market in the decades since, and one the most popular is the Boss BF-3 which offers a wide variety of sounds in a durable, quality stomp box that will last without problems for many years. It comes in at a similar price to the MXR and Electro Harmonix. 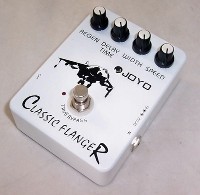 If you’re looking for a flanger pedal on a budget, check out the Joyo JF-07, which sells for about forty to fifty dollars and has gotten very good reviews. At a similar price, the Digitech XTF Turbo Flange is also a quality addition to any pedal board. Finally, the Danelectro D-6 Fab Flange retails for less than twenty dollars and has been creating waves both figuratively and musically.

Don’t forget that digital flangers are included with any decent multi-effects pedal, so rather than buying pedals one at a time, it might be a good idea to get an all-in-one if you’re just starting out. Good budget brands are Zoom and Digitech. The Zoom G1N retails for about sixty dollars and has a decent flange effect that is perfect for playing at home or even small gigs, while the Boss ME-25 and ME-70 are fantastic buys if you’re looking to spend two hundred or more dollars. 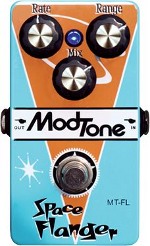 All of these are available to order online, but it’s always a good idea to try before you buy, so if you can’t find an online review- with audio or video preferably, visit the nearest instrument shop in your area, where they should have a selection of pedals for you to try. Compare the different pedals for sound quality and variety, as well as ease of use. Find out if they come with an adaptor or if you’ll need to get one yourself. If you’re going to be gigging with the pedal, find out how long a battery lasts or whether you’ll need to use a power source or pedal board if you don’t have one.

Where Does the Flanger Go In Your Pedal Chain?

It’s debatable where the flanger should be placed in your pedal chain. Traditional wisdom is that it should be placed with any other modulation effects after the distortion. This results in a cleaner and smoother sound; however, placing the flanger before the distortion gives a much more noticeable and “wild” effect, which some guitarists, Prince for example, prefer. The simplest solution is to experiment with placing your pedals in different orders to see what happens and then settle on what you think works best for you.

Remember that there is no real “right or wrong” when it comes to playing guitar. Some of the best loved songs and guitar sounds have been created when people broke the rules, like the Beatles deliberately slowing down the tape machine further with a pencil for a more pronounced flange or Dave Davies of the Kinks slashing his amp with a razor blade to get the distorted tone heard on “You Really Got Me,” a sound that has inspired countless heavy rock bands since. You don’t quite have to go to those lengths yourself, but remember that it’s all about having fun, so find the sound you like and then turn it up.

Songs That Use a Flanger

To really get a feel for what a flanger sounds like and how it can be used, let’s give a listen to some classic flanger examples. Can you hear the flanging in each of these?

Lenny Kravitz: “Are You Gonna Go My Way“