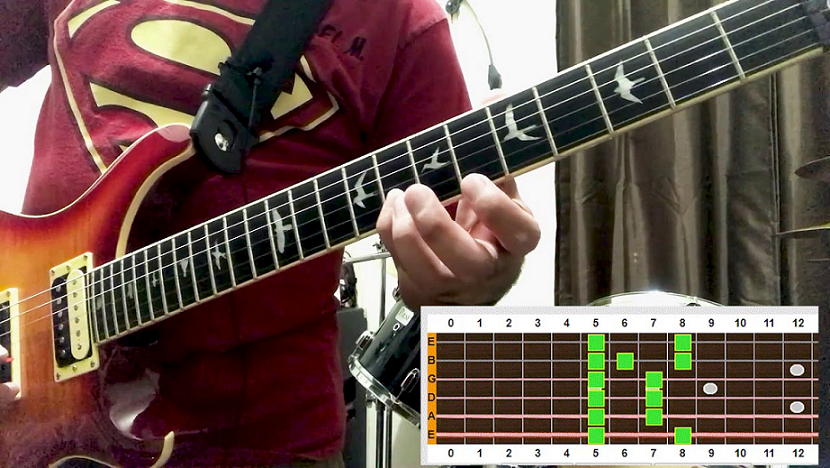 In today’s entry we will talk about the minor pentatonic scale. This scale is named after the prefix “penta”, a word that comes from the Greek word meaning “five”. That is, it is a scale made up of five sounds:

The minor pentatonic scale is a very interesting scale and very simple to play. Its scheme on the guitar is visually simple and easy to remember. This scale is also interesting to learn because it also has a similarity with the blues scale, with the only difference that the blues scale consists of six notes.

The A minor pentatonic scale in first position is located at the fifth fret. We will play it ascending and descending through all the notes.

How to memorize the minor pentatonic scale

To memorize the minor pentatonic scale it is best to look for visual similarities. If you observe for example the first position you will see that the sixth, the second and the first string have the same interval or the same distance while the other strings have a different one:

Whenever you learn a new scale observe these similarities to remember it visually.

How to practice the pentatonic scale

It is advisable to practice the pentatonic scale ascending and descending, as shown above, passing through the five notes that form it. LA-DO-RE-MI-SOL. Don’t forget to use the metronome.

The next step would be to play the pentatonic scales in all the keys using the circle of fourths and fifths. For this I recommend that every week you memorize two different positions and once you have assimilated them you keep practicing them so that you don’t forget them.

For example, you can play the circle of fifths in the first position the first week, the second week the second position following the circle and so on. This method is also effective for practicing other  scales. Let’s practice!