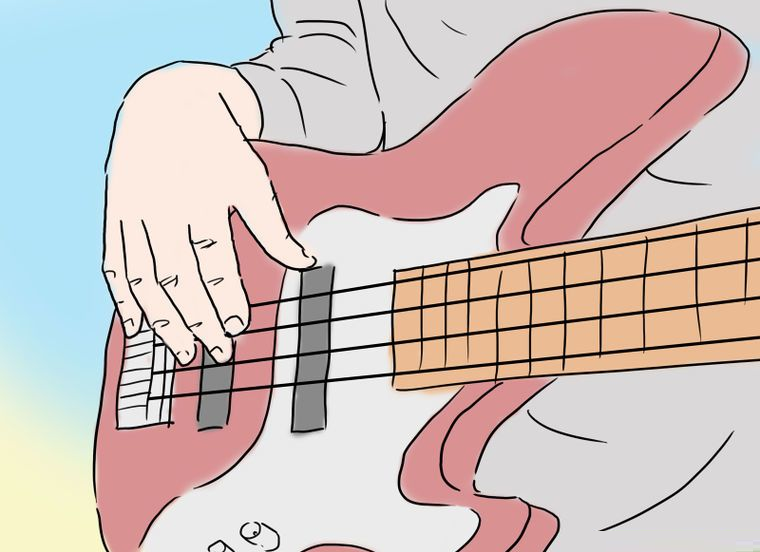 Anchoring is touching part of your picking hand to the guitar body close to the strings, as opposed to an unanchored or floating style where the right hand does not touch the guitar. The fingers or palm that touch the guitar create a sort of pivot point, so you know where you are, and theoretically, so that your pick will have an easier time finding the right strings.

There are several types of anchors:

So why should I not anchor?

The great debate: to anchor or not to anchor?

I’ve always done it that way. It feels natural. Look at all of these great players who anchor, are they wrong? It helps me know where I’m at and pick with accuracy.

“you lose accuracy if you don’t anchor.”

“I don’t know what you guys are talking about when you say there is strain, inaccuracy, and loss of speed (in regards to down-picking). I downpick much faster anchored (I don’t use my pinky, I rest my wrist on the bridge) than unanchored. I anchor when I play metal.”

Proponents of *not* anchoring say:

When I switched to an unanchored position I gained greater freedom of movement and there was less tension in my picking hand. Any part of your hand that is touching the guitar is restricting movement which slows you down.

Those who don’t anchor usually have their forearm resting on the edge of the guitar, but the pick hand is hovering over the strings and bridge. Some will let their palm or finger lightly touch the top of the bridge or strings, but never really use it as an anchor. Now when strumming, players will often palm mute, but this isn’t considered anchoring.

“i used to anchor. after reading a lot on the subject i decided to stop. it is a hard habit to break, but my speed went up 10 fold, there was LESS tension in my hand/wrist/arm, and my accuracy even improved. i would recommend not anchoring.”

It is NOT less accurate. It only seems that way to begin with, because it’s more difficult to learn.”

The comments above are from the entertaining and enlightening ultimate-guitar.com forums thread here. Thanks to skydropsblue, edg, and others for their excellent comments.

Excellent video on the subject:

When I asked him, he laughed and said he doesn’t think about it. But I think I kind of planted a seed there because I got a very detailed email a little while later. He sat down with the guitar, played a few songs and watched himself playing. Oh, that’s how I do it! So what does Aaron do?

Though, he said, there were a few songs, Sweet Child of Mine intro, for example, where he did anchor to hit individual notes.

So should a beginner anchor or not?

Most newbie guitarists do anchor because it feels more stable, especially when trying to do lead/solo guitar. Picking those individual notes is tough at first and its natural to want to have some grounding or an anchor at first. Sort of like training wheels.

If you anchor, try to go unanchored and see if it helps you play guitar faster. Making the switch to an unanchored position is tough, and make take several months to get used to but it could take your playing to the next level.

Ultimately, try not to anchor. If you can train yourself to keep your picking had off the bridge and body of the guitar, it will really free you up. Your picking hand should be loose, and anchoring does the opposite. It’s a tense point. So you’ve got one or two tense fingers anchoring but the fingers holding the pick have to be relaxed. It’s tough to be tense and relaxed in the same hand!

How do I make the switch from anchored to un-anchored?

Start slow and give yourself time. Play as you normally do (anchored), but reserve maybe 1/4 of your practice time to playing unanchored. Even if it’s only 5 or 10 minutes a day. That is fine. Go slow! Don’t try to play anything difficult. Go back to the basics, play warm-up style scales that you know by heart. Play them methodically.

Slowly increase the amount of practice time devoted to floating. It should be a natural change that happens. Don’t put a lot of stress on yourself. Keep at it and don’t give up. It’s going to feel very strange at first–like your picking hand is out there on the end of a fishing pole and you have totally lost control and accuracy. That’s ok. Don’t give up. Look at it as a 3 to 6 month project that will eventually take your guitar playing to the next level.

I really hope this helps you concerning anchoring, especially if you are really trying to get better. Let me know what you think of anchoring in the comments below. –Dave

Learning 0
The guitar, within the “jazz” genre, has a long history that begins in the
Comments: 20
Leave a Reply Cancel reply
Recent Posts